Saved Searches Advanced Search
We’re open every day at most EPL locations. Plan your next visit and check out our new opening hours. 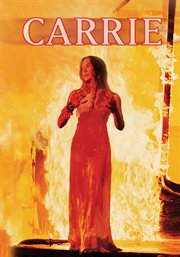 Some content below may have been reported by users for containing spoilers or offensive content. Learn More

You got corn syrup on my psychic!

You got psychic in my corn syrup!!!

Final Results: S++ Rank, Top Honors. Sissy Spacek embodies the awkwardness of a teenage outcast in a bloody romp through hell. The 1970s flavor in this movie is a riot. You'll cringe, feel unease, laugh, and be shocked.

This is a good remake, though it's a little unbelievable that Chloe Grace-Moretz would be an outcast.

Classic horror flick. Sissy Spacek is creepy as hell as the titular character. It's a little corny compared to horror movies now given the advancement of special effects and movie scores but it's still worth a watch.

Competent, but pointless remake of the 1976 horror film, based on the Stephen King novel. Chloe Grace Moretz takes the lead role, Julianne Moore plays her monster of a mother, Ansel "Baby Driver" Elgort (typing that doesn't make his name seem any less fake) is her hunky prom date, Portia Doubleday is the mean girl, and Judy Greer is the sympathetic gym teacher. Aside from updated special effects, it's almost exactly the same as the original. Despite a female director, it doesn't fell particularly feminist. Moretz was also in remakes of "Suspiria" and "Let the Right One In."

I loved this book by Stephen King, a young teenager who possess a great power with her mind. One night at her senior prom, Carrie had been embarrassed one too many times. She then takes her power to the very abrupt level, taking out all her anger on the ones who have bullied her. You read along to discover her uncontrollable fury and destruction. This movie is so different as you go from the scary religious mother to the pig’s blood. I thought all the different idea were unique, I wonder where he comes up with all these ideas. Overall an amazing book and would recommend reading it for any ages. 4/5 Stars @Effystonem at the Hamilton Public Library of the Teen Review Board.

A classic from the time when horror movies were good

Is it a horror movie

You're welcome for bringing this classic to the library. The only reason this film gets a four and a half stars, is that the music score is rather annoying,. Other than that, this film is really good, its scary, slightly humorous, and almost everyone was fun to watch. The exception is John Travolta; I could not take this guy serious even if he was going all Pulp Fiction on me. It can be corny at points, and is severely dated in a few more, but still holds up overall. I don't know about you, but I think I'll skip the prom this year.

Chloe Grace Morentz owns her performance, Julianne Moore follows through, and Ansel Elgort gives an excellent breakout performance. Also, the updates to modern day are seamless to the point you wouldn't know the book and original film were made in the 1970s. However, the effects are kind of silly in the climax, the side characters don't feel that deep or developed, it can't decide whether it wants to be a repeat of the original or it's own thing; last and by no means the least, it isn't violent enough. Numerous setups for great violent deaths, and yet they cut away before the deliver. That's this movie in a nutshell' great setups, but doesn't follow through. I still like it and will watch it occasionally, but is inferior overall when compared to the original.

Aside from being really stupid, it's actually a pretty awful movie. (I didn't remember it being that absurd, over done, with midland or less writing & production quality, when I was a teen. Funny how that works... : )
Don't waste your precious time on this, unless you really want to see Nancy Allen & Sissy SpaceCase in their 20s, nude.

As the DVD cover states it so well: "All hell breaks loose when a tortured, misfit teenager (that's Sisssy Spacek) unleashes her secret telekinetic powers against her psychotic mother (Piper Laurie created this character with her performance) and (a wide cast of) sadistic classmates. Spacek and Laurie both received Academy nominations but lost to "Network" and its momentum. Too bad: Spacek should have won, Laurie should've fought Jodie Foster ("Taxi Driver") for the Best Supporting nod. Brian DePalma, in the extras provided in this set, explains the use of humor throughout and provides a key to writing/making movies: "If you don't give the audience something to laugh at, they'll laugh at the whole thing."

One of cinema's ultimate operatic teenage melodramas. I have seen "Carrie" more times than I can count, and yet it never loses its uncommon heartbreak and blood-curdling dramatic power.

cool movie Recommend this movie to anyone

A decent adaptation but it doesn't have the style and excitement of the DePalma-directed original which nabbed Oscar nominations for both Sissy Spacek and Laurie Piper as the daughter and mother respectively. Chloe Moretz is very talented and some of the scenes with Julianne Moore are well done but the supporting cast is totally forgettable; unlike the original which had John Travolta and Nancy Allen, amongst others. So, not a horrible film, but you may as well watch the original.

A fair movie on its own, but as a remake, why bother? Only two reasons for such a remake: playing it safe and showing off modern special effects.
No surprises. The best part of the DVD was the telekinetic coffee shop in the extras section.

Ticket! I saw this at the movies
and I have this movie. It was
so cool. To see Carrie get
revenge on her mother and her
classmates! That is an awesome
special power to have!

Great horror movie from the 70's about a high school girl with telekinesis. Sissy Spacek is great in the lead role. Director Brian De Palma is actually quite a funny filmmaker, something many critics gloss over.

The original movie directed by Brian De Palma and starring Sissy Spacek. Contains the usual tongue in cheek humour of De Palma in this satirical look at teenage life in the 1970's- and I'm sure it still holds relevance for the current generation. Blows the remake out of the water in every way imaginable.

it's great
it's a combo of the book and original movie

Honestly, I think this is one of the greatest movie. Even though it's not scary.

Just re-watched this oldie but goodie with my moms! Couldn't believe she had never seen it...she thought it would be too scary...it's really not scary, it's more about the age-old misunderstood teen. The title teen just happens to have telekinetic powers. Great cinematography mirrors Carrie's growing powers.

Well - It's all mind over matter.

Carrie White doesn't wield an axe, turn her head around backwards, drink blood, nor does she eat human flesh, but she sure can do some real neat tricks with telekinesis.

This evocative story (from 1976) of a high school misfit sadly degenerates into cheap, gory, melodrama when Carrie unleashes her powers in revenge against those who mocked her.

All wrapped up with an ending that clearly contained all the tell-tale signs of "Carrie 2 - Coming Soon" written all over it.

About a year before seeing the movie "Carrie" I had read the Stephen King novel of the same name. What a relief it was that the Carrie character in the movie wasn't the same as the one in the novel. King had created a despicable character in his over-long novel.

Casting Sissy Spacek as Carrie was, without a doubt, one of the key elements (there were definitely others) that saved this flick from becoming just another mediocre, predictable, run-of-the-mill "teen" horror movie. Spacek's performance as Carrie was nominated for an Oscar in 1976. (Faye Dunaway won the thing) This would be the 2nd time in movie history that an actress in a horror film would receive such a nomination.

The other actress in Carrie that deserves mentioning is Piper Laurie, who plays Mrs. White, Carrie's mother. Laurie's portrayal of the self-righteous, Christian, kookoo-puff is first-rate.

Of course, Brian DePalma's directing abilities deserve a lot of credit here. His command behind the camera was strong and sure. It had to be. 'Cause when it came to the likes of a horror movie, having some real sense of professional restraint is vitally important.

I know that this movie had to be the way it was because it was a horror movie and that everyone was expecting lots of terror, and everything, but I would think that a lonely, out-cast girl like Carrie who discovered she possessed the power of telekinesis would learn to really control and master it and then use it as a sure-fire way to win friends and admiration, instead of causing so much destruction and pain. Hell, I would sure like to have a friend with the powers that Carrie had. Wouldn't you!?