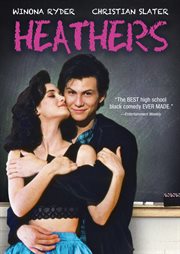 Mean Girls, but meaner. It all begins when Veronica and her boyfriend, J.D., accidentally poison the popular clique leader, Heather, and make it look like a suicide.

Dark, dark satire on various elements of teen culture in the late 1980s, including the quest to be the coolest, pretending to have a social conscience, and the romanticization of suicide. Eerily prescient of what was to come in the 1990s, with the sudden increase in school shootings as a reaction to bullying, which at times makes it hard to watch. But excellent performances all around and well worth watching, if you appreciate satire and black humor.

I remember seeing the end of this film probably a handful of users after its release. Lately I checked it out from the library because watching Mr. Robot had me thinking about Christian Slater films and I'd always wondered what I missed with Heather's. Perhaps time and maturation hurt me for this film -- I don't think I lasted even 20 minutes before shutting it off. It's a type of humor but not my type of humor -- too much vapid and not getting anywhere. Time to go watch Pump Up The Volume again for a Christian Slater nostalgia blast ...

This move was a favorite from my teen years, and it was fascinating to rewatch as an adult. So much has changed in the world post-Columbine and this movie seemed much darker to me now.

I liked the musical better.

what a cast for this film, an erudite take on the teen film genre. favorite scene: the croquet match.

This is by far my favorite movie (currently) I saw it when I was 12 and really enjoyed it. It's dark, kind of violent, and really thrilling. I was introduced to it via the musical by the same name, which I highly suggest you check out.

One of my favorite 80s movies. Not sure what's up with all the bad reviews. Was it seriously your 1st time watching the movie?? Some people have terrible taste in classic 80s movies.

I love my dead gay son.

Did you have a brain tumor for breakfast?

Chaos is what killed the dinosaurs, darling.

Duke: Veronica, you look like hell!
Veronica: I just got back

"Did you have a brain tumor for breakfast??"

Veronica Sawyer: All we want is to be treated like human beings, not to be experimented on like guinea pigs or patronized like bunny rabbits.
Veronica's Dad: I don't patronize bunny rabbits.

Veronica Sawyer: It's one thing to want someone out of your life, but it's another thing to serve them a wake-up cup full of liquid drainer.

MeredithHobbs thinks this title is suitable for 13 years and over

ArapahoeTina thinks this title is suitable for 16 years and over

GreyNeonCat13 thinks this title is suitable for 12 years and over

bdls206 thinks this title is suitable for 17 years and over

callieperry thinks this title is suitable for 16 years and over

A girl who half-heartedly tries to be part of the "in crowd" of her school meets a rebel who teaches her a more devious way to play social politics.

Find it at EPL